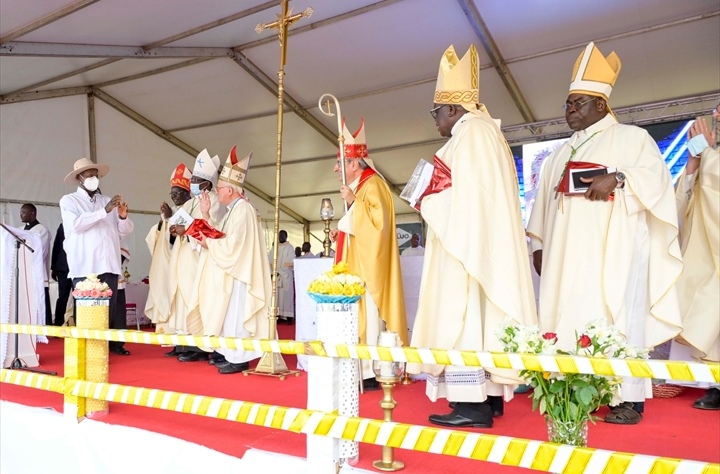 The Italian priest is remembered for his faith, hope, charity, humility, goodness, patience, and generosity.

“Pope Francis presents him as a good Samaritan. We are invited to consider emulating the Blessed Joseph Ambrosoli’s faith, hope, charity, humility, goodness, patience, generosity, the spirit of service, sense of duty, and availability,” Archbishop Bianco said. “The new Blessed Ambrosoli was a person who did not look to his interests, but his life was complete and tireless- giving to the needy as a priest and doctor,” the Apostolic Nuncio  added. Fr Ambrosoli, who was born in 1923 in Ronago, a small town in the Province of Como, Italy,  was a member of the Comboni Missionaries of the Heart of Jesus.  He died in 1987. President Museveni asked the Catholic Church to rally Christians to embrace commercial agriculture to fight poverty. “With a massive involvement in agriculture by every household, we will create a lot of production which translates into income. Once the homesteads have money, food, the churches will be prosperous because the Christians will give more support,” Mr Museveni said.

Acclaimed a saint by the people

Ambrosoli was born in 1923 in the Province of Como, Italy. He arrived in Uganda in February 1956. While in Gulu, he eventually relocated to Kalongo and founded the Kalongo Hospital. This facility gained a reputation for excellence. For almost 31 years, until 1987, when he died, Fr Ambrosoli cared for Uganda’s sick. “After he died in 1987, people felt that this man must have been a holy person. So, I took the courage to constitute a small committee to see how we could start the process of beatification … The Prefect of the Dicastery for the Causes of Saints in the Vatican encouraged us to tell people to pray so that we could have some favours through the intercession of Fr Ambrosoli. About two years ago, a miracle happened in the hospital. A lady with a malignant tumour got healed through the intercession of Fr Ambrosoli,” said the Archbishop Gulu.

Emulate the values of Blessed Ambrosoli

The beatification was, in fact, initially scheduled for 22 November 2020 but was postponed due to the Covid pandemic. Fr. Achilles Kiwanuka Kasozi, Provincial Superior of the Comboni Missionaries in Uganda, urged people to focus more on Fr Ambrosoli’s love for the poor and sick. He has since invited Christians to emulate the values lived by Blessed Ambrosoli.