Significance of Meals in African Culture

Home/Articles/Significance of Meals in African Culture 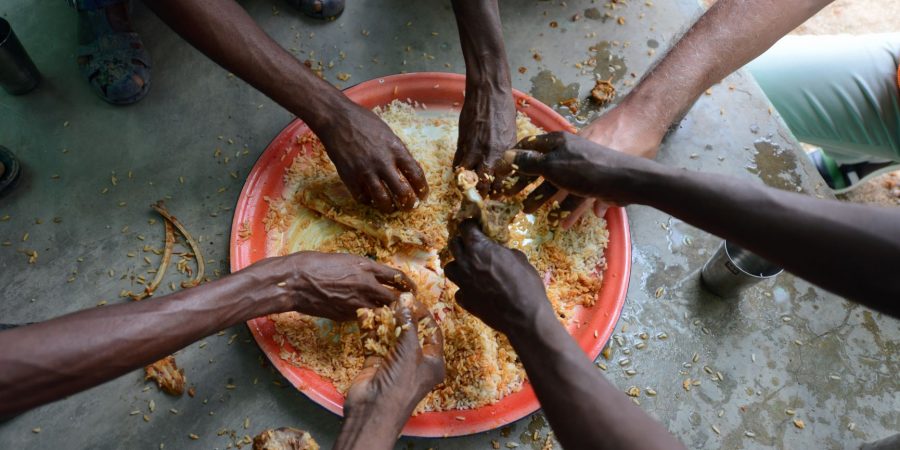 In traditional Africa, a meal is not a mere filling of one’s stomach. Animal feeding cannot be called a meal; it is a mere satisfaction of a biological necessity. Humans eat according to strict norms and meals are surrounded by taboos especially when they take place in families or during important feasts. They are in fact rituals in the etymological sense of the word: ‘rite’ comes from the Sanskrit ‘rita’ which means order. When a family sits for a meal, every single person at table represents a set of values projected on the food. The mother who cooks the food represents her family, clan and village. In her can be discerned the qualities which Africans invest in women: she is beautiful, clean, decent, obedient to the husband and to his people; she is hardworking, productive or fruitful and capable of looking after her family. She is hospitable, polite and kind. She also educates her children and schools them in good manners.

Whoever eats the food she has cooked shows appreciation for all these values and in some way he/she feeds on them and reinforces his/her life. The husband for whom the mother ‘came’ to ‘cook’ (in some African languages the marriage of a woman is rendered ‘cooking’), represents his people and clan and the qualities Africans invest in men: courage, authority, strength, prosperity, hard work, capacity to protect one’s family and to provide it with food, shelter, clothing etc. All these values are reflected on the food that is being consumed and they are appreciated by whoever takes part in the meal. The children who help the mother to prepare the food by fetching water and collecting firewood or whatever is necessary for the meal represent the young generation with the qualities of obedience, work, good manners, listening and readiness to learn.

This latter quality is seen in the fact that normally children are not allowed to speak during meals. Should there be a visitor at table, he/she represents the world outside the family in front of which this particular family is obliged to show its worth. Anything abnormal at table can spoil the name of the family. No one would like to visit or marry from a family that does not observe table manners. Wang welo bit (The eyes of a visitor are sharp), so goes an Acholi wise saying. If we remember that hospitality is one of the core values in African cultures, we can understand this point very well. The visitor’s sharing in a family meal signifies his/her appreciation of all these values he/she somehow feeds on and commits himself/herself to work for the wellbeing of this family. He/she will be there in both good and difficult times.

This is why Africans feel offended when you refuse to eat their food. You are refusing their hospitality, fraternity and all that their food represents; sometimes this refusal is interpreted as despising the family which prepared it. A meal taken together is so important that if there is something amiss between husband and wife, one of them refuses to eat. Sometimes children who misbehave are excluded from lunch or supper as a punishment. Eating together will be hypocritical if people are not in full agreement.

The funeral meal is particularly important. It is the dead person who unites all the people present for a meal with the help of his family, village and clan. Partaking of this meal means unity with the dead person and with all his/her people. You can imagine how serious the refusal to participate in the preparation of this meal can be on the part of whoever is related in some way to the deceased or to refuse to eat of it on the part of an outsider who happens to be there. The washing of hands is obligatory before eating, not only for hygienic reasons but especially for symbolic cleansing. Even if the hands are visibly clean, one must wash one’s hands because washing hands is a ritual for cleansing the heart, which is always represented by the hands. We eat with clean hands; we eat with a clean heart and we should harbor no ill feelings against anyone at table with us. The one who pours water for us to wash before a meal is not a slave; she/he is an agent of purification. It would be interesting to apply some of these points to the Eucharistic table on which the role of God the Father, God the Son and God the Holy Spirit……..and our own role as Christian family is well reflected.