Fifty Years as a Catchist 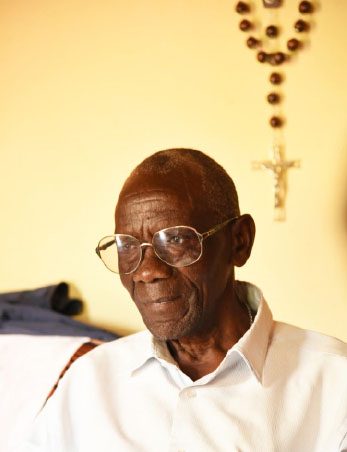 Last year, Pope Francis wrote the encyclical on the ministry of the catechists and also introduced the right of the institution of the catechist. In line with the recognition of the primacy of the catechist ministry in the Church we bring you the story of catechist Lauriano Mibulo who for the past 50 years has dedicated his life at the service of the Church as a catechist. Lauriano Mibulo is a catechist at Kasaala Parish in Kasana-Luweero Diocese. He has been a Catechist for 50 years, a calling he will not give up anytime soon. He is a resident of Kiya village, Kasaala Parish in Luweero district, born in 1942 in Ntalagi, present Nakaseke district. The soft-spoken Catechist said his love for God and his religion has kept him strong in his service.For the past fifty years as a Catechist, Mibulo has worked in Butikwa Sub- Parish, Nakikota Sub-Parish, Nsenge Sub-Parish, Buzirandulu Sub-Parish and Kasaala Parish, all in Kasana-Luweero Diocese. Cat. Mibulo is not about to retire. He says it is only God who knows when to retrench him. It all began in 1970, eight years after his first marriage to his late wife. He received a letter from the Head of the Laity in his Sub-Parish of Butikwa, requesting him to act as the Catechist. Since he loved God and his religion, he had no problem taking up the request. It was a journey back memory lane as he narrated his experience. “The first thing that has kept me in this service is, I love God and religion so much that I was one of the young boys in Ntalagi who were committed to religion,” he said.

He explained that he would walk three kilometers to attend Sunday Mass and any other Church function at the Parish, every time there was one. He noted with joy that our visit to his home brought back a wealth of memories; of when he was first requested to become a Catechist. When we visited, he was in his coffee field harvesting coffee beans just like when he was called from his garden, the first time and handed a letter to serve as a Catechist in his Sub-Parish. He remembers it like it was yesterday. He observed that Fr Joseph Achetti (RIP) had visited the Sub-Parish of Butikwa for pastoral work and the head of Laity also wanted him to meet the priest. He added that after mass, Fr Achetti requested him to begin serving the Lord and blessed him. “I admired to serve the Lord so I felt happy,” added Cat. Mibulo.

Despite the hard times during his youthful days, which included, transport and communication, he did not give up on his calling. He would walk long distances or ride on bicycles to deliver a message. On 10th July 1972, Fr Flivio registered him for a training at the Catechist Centre in Villa Maria Masaka, which he started and completed on 13th January 1973. After his training, Fr George Previdi visited his home in Kyalagi and brought him to Kasaala Parish as the new Parish Catechist. In Kasaala, he built a new home with his wife.

In his years of service, he has instructed numerous children but remembers only a few candidates like; Fr Jooga and Fr Mukasa, both priests of Kasana-Luweero Diocese. He added that most of the people he gave catechesis instructions to, still remember him, though his memory is now low. Besides training children at Kasaala boys and Kasaala girls Primary schools and children at the parish, he also held other responsibilities. He was elected as the Head of Catechists in Kasaala Parish, which consisted of; Kankole and Buzibya zone where he would meet Catechists in every zone.He was later elected to head Catechist in Kasaala Deanery. Catechists at Kasaala Parish have nicknamed him Monsignor, which is the popular name he is known by.

He remembers his silver Jubilee like it was yesterday. He said in 1995, as he celebrated his silver jubilee as a Catechist, he was invited to Rubaga Parish for a retreat, being the Head Catechist in Kasaala Deanery. He said after the retreat, he was gifted with a wall clock. His golden Jubilee celebrations in 2021 was one of the best things to have happened to him. He speaks so highly about it as he was overjoyed to host the Bishop in his home. He will show you which chair the Bishop sat in during the celebration.

He calls upon fellow Catechists to be committed to their calling even if times are hard and added that they should persevere. He noted that he has personally had challenges but God has always been there for him. He has never felt like letting go. He is grateful to God for the priests he has worked with, for the courage they have been giving him and he is equally grateful to the Catechists who have worked alongside him. Catechist Mibulo has always been a farmer and still is.