Pope Francis thanks child for impromptu ‘lesson’ at general audience 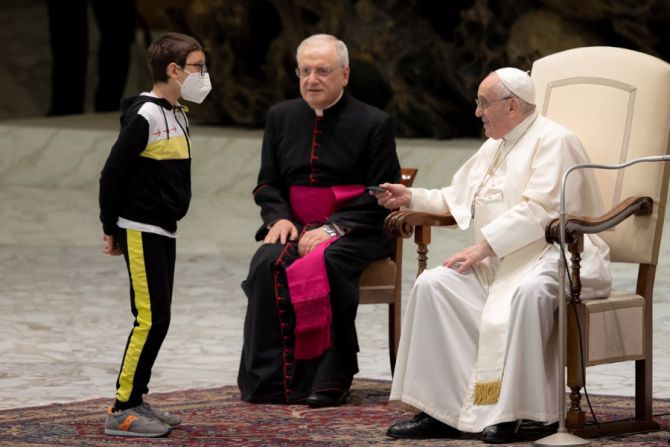 “In these days we are talking about the freedom of faith, listening to the Letter to the Galatians,” he said. “But I was reminded of what Jesus was saying about the spontaneity and freedom of children, when this child had the freedom to approach and move as if he were at home… And Jesus tells us: ‘You too, if you do not behave like children, you will not enter the Kingdom of Heaven.’”

The courage to approach the Lord, to be open to the Lord, not to be afraid of the Lord: I thank this child for the lesson he has given us all. And may the Lord help him in his limitation, in his growth because he has given this testimony that came from his heart. Children do not have an automatic translator from the heart to life: the heart takes the lead.”

The unexpected encounter took place early in the audience as clergy read out Galatians 5:13-14 in various languages, a passage in which the Apostle urges Christians not to abuse their freedom but instead to “become slaves to one another” through love.

As the verses were read in German, the boy, who was wearing a black tracksuit, spectacles, and a face mask, approached Pope Francis, who smiled and clasped his hand.

Msgr. Leonardo Sapienza, the regent of the Prefecture of the Papal Household, who sits to the pope’s right at general audiences, rose and gave his seat to the boy. The child sat briefly, then stood and pointed at the pope’s zucchetto. He led the priest giving the Portuguese reading over to the pope to show him the white papal skullcap. Eventually, the boy walked back down from the platform proudly wearing his own zucchetto.