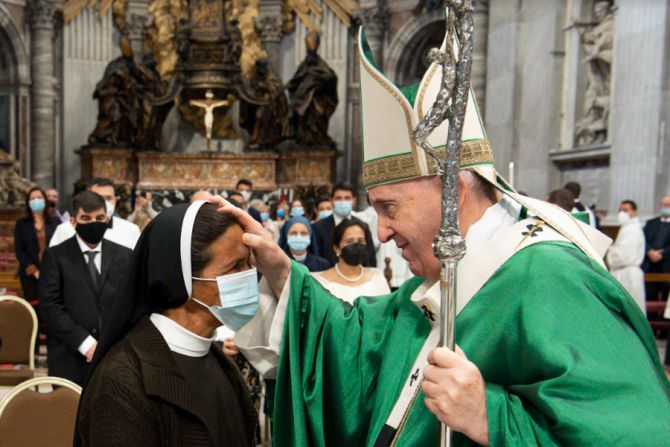 Pope Francis greeted a Colombian nun on Sunday, shortly after she was freed four years after being kidnapped by Islamists in Mali. The pope blessed Sr. Gloria Cecilia Narváez Argoti before a Mass in St. Peter’s Basilica launching a worldwide synodal process.Sr. Gloria, a member of the Congregation of the Franciscan Sisters of Mary Immaculate, was kidnapped in southern Mali in 2017.

The Malian presidency announced that she was released on Oct. 9 after “four years and eight months of combined efforts of several intelligence services.” It posted photographs on social media of her meeting with interim president Col. Assimi Goïta, accompanied by Cardinal Jean Zerbo of Bamako.

“We prayed a lot for her release. I thank the Malian authorities and other good people who made this release possible,” the cardinal told AFP. Armed men kidnapped Sr. Gloria in Karangasso, about 90 miles south of the town of San, near the border with Burkina Faso, on Feb. 7, 2017.

The men forced her to hand over the keys to the community’s ambulance. The vehicle was later found abandoned. Three other sisters were present at their house but escaped. The kidnappers were going to take the youngest nun, but Sr. Gloria reportedly volunteered to take her place.

The Colombian nun had served in Mali for 12 years before her abduction.Her community administers a large health center in the country, as well as a home for some 30 orphans.Earlier this year, she was allowed to give proof that she was alive with a handwritten note in which she asked people to pray for her.

In the 11-line message sent to her brother Edgar Narváez Argoti via the Red Cross, she wrote: “I send everyone my warmest greetings. May the good Lord bless you and grant you health. I have been a prisoner for four years and now I am with a new group.”

She identified the group who held her as Jama’at Nasr al-Islam wal Muslimin, an Islamist organization in West Africa and the Maghreb.

In her message, she asked: “May they all pray a great deal for me. May God bless them all. I am hopeful that God will help me to regain my freedom.”