‘This is a moment of shame’: Pope Francis expresses sorrow at French abuse report 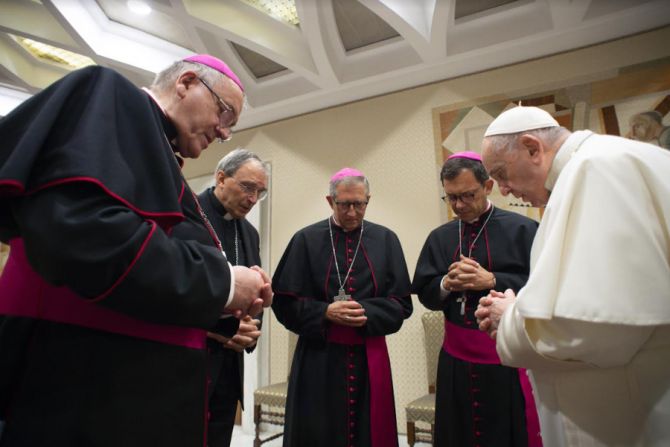 Pope Francis expressed sadness and shame on Wednesday in response to a report estimating that hundreds of thousands of children were abused in the Catholic Church in France over the past 70 years. “This is a moment of shame,” Pope Francis said during his general audience on Oct. 6. “To the victims, I wish to express my sadness and my pain for the traumas they have endured and my shame, our shame, my shame that for so long the Church has been incapable of putting this at the center of its concerns, assuring them of my prayers,” he said.

The pope’s comments came a day after the Independent Commission on Sexual Abuse in the Church (CIASE) published a nearly 2,500-page final report estimating that 216,000 children were abused by priests, deacons, monks, or nuns in France from 1950 to 2020.

It suggested that there were “between 2,900 and 3,200” abusers out of 115,000 clergy and monks, which it noted “would imply a very high number of victims per aggressor.” The study also said that “more than a third of sexual assaults within the Catholic Church were committed, not by clergy or monks, but by lay people.”

Before entering the Paul VI Hall for his general audience, Pope Francis took a moment to pray with four French bishops for the victims of sexual abuse.

The French bishops were in Rome for their ad limina visit, a papal meeting required for every diocesan bishop in the world to provide an update on the state of his diocese. “I encourage the bishops and religious superiors to continue to do everything possible so that similar tragedies might not be repeated,” Pope Francis said at the general audience. “I express my closeness and fatherly support to the priests in France in the face of this trial which is difficult but beneficial, and I invite the Catholics in France to assume their responsibility to guarantee that the Church might be a safe home for everyone.”

In response to the French abuse report, Bishop James V. Johnston Jr. of Kansas City-St. Joseph published a statement on behalf of the U.S. bishops’ conference.

Johnston serves as the chairman of the bishops’ Committee on the Protection of Children and Young People. “In renewed solidarity with victim-survivors who have courageously come forward, we join the Church of France in praying for forgiveness, healing, and protection,” the bishop said.

“This report underscores the need for us to repent and grow in our commitment to serve the people of God. The Holy Father, in his pastoral concern for the Universal Church has called us all to greater accountability and transparency in addressing the sins of abuse and the mishandling of abuse claims at every level.”

Cardinal Seán O’Malley, the president of the Pontifical Commission for the Protection of Minors, also issued a statement on Oct. 6, calling the report an “indictment of the failures of leadership in the Church.”

“This history of unchecked abuse extending over the course of generations challenges our comprehension of how innocent persons could have suffered so terribly and their voices been ignored for so long,” O’Malley said.