Christianity without the Cross is ‘sterile,’ says Pope Francis

Home/News/Christianity without the Cross is ‘sterile,’ says Pope Francis 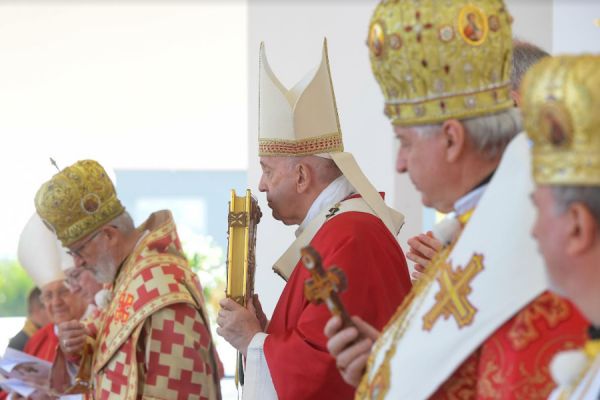 On the feast of the Exaltation of the Holy Cross, Pope Francis celebrated the Byzantine Divine Liturgy and called Christianity without the Cross worldly and sterile.

“Crucifixes are found all around us: on necks, in homes, in cars, in pockets. What good is this, unless we stop to look at the crucified Jesus and open our hearts to him, unless we let ourselves be struck by the wounds he bears for our sake, unless our hearts swell with emotion and we weep before the God wounded for love of us,” Pope Francis said in Slovakia on Sept. 14. Witnesses of the Cross have but one strategy, that of the Master: humble love.

They do not look for triumphs here below, because they know that the love of Christ bears fruit in the events of daily life, renewing all things from within, like the seed that falls to the ground, dies and produces much fruit,” he said.The pope presided over a live-streamed Divine Liturgy in the Byzantine Rite in Prešov, eastern Slovakia, and delivered a homily in which he posed the question: Why did Jesus die on the Cross?

“Why did he do this? He could have saved his life, he could have kept his distance from the misery and brutality of human history,” Pope Francis said.“Instead, he chose to enter into that history, to immerse himself in it. That is why he chose the most difficult way possible: the Cross. So that no one on earth should ever be so desperate as not to be able to find him, even there, in the midst of anguish, darkness, abandonment, the scandal of his or her own misery and mistakes.”

“There, to the very place we think God cannot be present, there he came. To save those who despair, he himself chose to taste despair; taking upon himself our most bitter anguish.” Pope Francis said that Jesus even experienced abandonment so that no one would ever be alone in their trials.At the beginning of the Divine Liturgy, the pope spent a moment in prayerful veneration of the Cross. A large Byzantine cross with three transverse arms hung above the outdoor altar in Prešov, flanked by an icon of Mary, Mother of God, and the Christ the Teacher icon.

‘We proclaim Christ crucified … the power of God and the wisdom of God.’ So St. Paul tells us, but he does not hide the fact that, in terms of human wisdom, the Cross appears as something completely different: it is ‘scandal’ and ‘foolishness,’” the pope said in his homily.

“The cross was an instrument of death, yet it became the source of life. It was a horrendous sight, yet it revealed to us the beauty of God’s love. That is why, in today’s feast, the people of God venerate the Cross and the Liturgy celebrates it.”