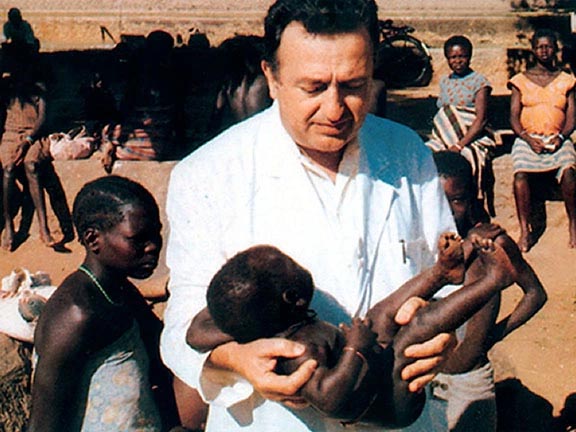 On December 17th 2015, Fr. Giuseppe was bestowed by Pope Francis the title of “venerable of the Catholic Church”. Father Giuseppe was born in 1923 in Ronago, in the province of Como to Giovanni Battista and Palmira Valli. At a tender age, the young Ambrosoli had no respite from a serious fever, and the doctors did not hide their grave concerns. A woman of deep faith and devotion, Palmira turned to the Virgin Mary to seek comfort, she prayed earnestly; “Holy Virgin, please don’t take my child away. Have pity and leave him with me. I do promise that when he grows up, I will happily surrender him to you, if you still want him. ” (Call Me Giuseppe, 2017,17) She would repeat her promise and inevitably, believers were convinced that Giuseppe’s entrustment to Mother Mary left an indelible mark on his entire life, and indeed, the little boy recovered fully from what had seemed to be a life-threatening intestinal disease.

Mamma Palmira attended personally to the religious education of the eight children, while their father, Giovanni Battista, a passionate apiculturist focused on the family business. Giuseppe was born on July 25th, 1923 and raised in Ronago, where he finished his primary school. After a short time at the Istituto Volta, he joined the school of the Scolopi Fathers in Genoa, where he attended the gymnasium and proved to be a serious-minded and conscientious student. After graduation with a diploma in 1942, he enrolled in Medical School at the University of Milan, and in the meantime, he strengthened his commitment in Azione Cattolica (an Italian Catholic lay association) led by Fr. Silvio Riva, who had gathered the brightest and most devoted young people around his Cenacolo, an association where people prayed together and shared thoughts. After World War II in June 1940, Giuseppe

graduated in Medicine and Surgery in July 1949. Before flying to Great Britain, Giuseppe rode to Rebbio, a little town where Mamma Palmira occasionally visited the Comboni Missionaries’ convent to give them an offering, some second hand clothes and pots of honey and candies. Here, Giuseppe inquired whether a doctor is allowed to become a priest and a priest is allowed to serve as a doctor. His doubt was cleared out by Father Simone Zanoner in the affirmative, as Giuseppe expected. Even Father Antonio Todesco, the superior general of the order gave his approval. Giuseppe started his novitiate after completing his specialization in London. Those were very intense years: studies at the Comboni Institute in Gozzano absorbed him completely. It was a hard time for Giuseppe; the rules of the house were very rigid, all his companions were much younger than him and there was no one to share mature thoughts with. As a matter of fact, many of them were looking for a father figure to turn to for advice and support.

After taking the temporary vows of poverty, chastity and obedience in 1953, ‘Brother Ambrosoli’ continued his theology course in Venegono. His tutors had a special project in mind for him. His medical degree was indeed a blessing for the Comboni missionaries. Father Alfredo Malandra was an experienced and resolute missionary; he had been working in Uganda for years and had asked for an additional helping hand in northern Uganda. They needed a doctor. Father Giuseppe was a surgeon. Only three years after the beginning of the third year of his theology course, Giuseppe received a letter from the Father General, of the Comboni missionaries, informing him that in a few months, he would be ordained a priest. It was on the feast for the Novena of the Immaculate Conception. Giuseppe dedicated everything to Mother Mary’s care: ‘May she take my priesthood to heart and may her teachings and God’s will turn me into a good priest.” (Call Me Giuseppe, 2017, 27)

Everything was ready; Father Giuseppe was ordained a priest in December 17th, 1955, at the age of 32 by the Archbishop of Milan, Cardinal Giovanni Battista Montini-to faithfully bear witness to Christ and to demonstrate his adherence to Christ’s commandment of love through his life. (Call Me Giuseppe, 2017 9) A few weeks after, everything was ready for his journey to Gulu-the first leg of his trip to Kalongo.

Fr. Giuseppe left his family and a brilliant career as a doctor to devote his life to the neediest. He got to Kalongo’s small dispensary, in northern Uganda, in 1956, on a ship called Africa and there, he remained until the day of his death, in 1987, at the height of Uganda’s disastrous civil war. During his thirty years as a missionary priest, Father Giuseppe, who is remembered in Uganda as the ‘Doctor of Christy’ managed to transform a small dispensary into a modern and well-equipped hospital and founded St. Mary’s Midwifery School, now one of the best midwifery schools in Uganda. Faithful to St. Daniel Comboni vision, he has left for future generations the best example of how it is possible to “Save Africa with Africans.” Is this how it all ended? No. That story of dedication to helping others and of human perseverance continues to this day, through the Foundation set up by the family and the Comboni missionaries, who picked up Father Guiseppe’s legacy to provide support and continuity to this miracle of love. And today, this 300-bed hospital facility provides treatment to thousands of children, women and men, with unfailing professional care and love. Next to the hospital and the operating rooms, the school is also in full operation.

Como, Milan, Kalongo; Thousands apart, Father Giuseppe and his work were able to shorten the distances between the Hospital and the Foundation, Ugandan doctors, and Italian volunteers, the need to receive and the desire to give. “The operating room had become his sanctuary” as one of the nuns who collaborated with him put it. Father Giuseppe was a ‘martyr’, namely a ‘witness’ to faith in Christ and to Christian love, to which he dedicated his entire life, his thoughts and his energies. (Call Me Giuseppe, 2017, 12) On August 23rd, 1952, during his spiritual training, he wrote in his personal journal: “we must remember the imitation of Christ, that is, that praise doesn’t add anything to what we are; what we are, we are. We are no greater than what God sees in us.” (Call Me Giuseppe, 2017, 13)

According to Mario Calabresi, (Call Me Giuseppe, 2017, 8) the life of Fr. Ambrosoli shows us how courage, care and volunteer work can give meaning to life and fill it with hope and love. It teaches us how to get rid of regrets, cynicism and indifference -the greatest diseases of contemporary society. Father Giuseppe breathed his last on March 27 from kidney failure. Fr. Guiseppe Ambrosoli’s beatification is set for November 2020.