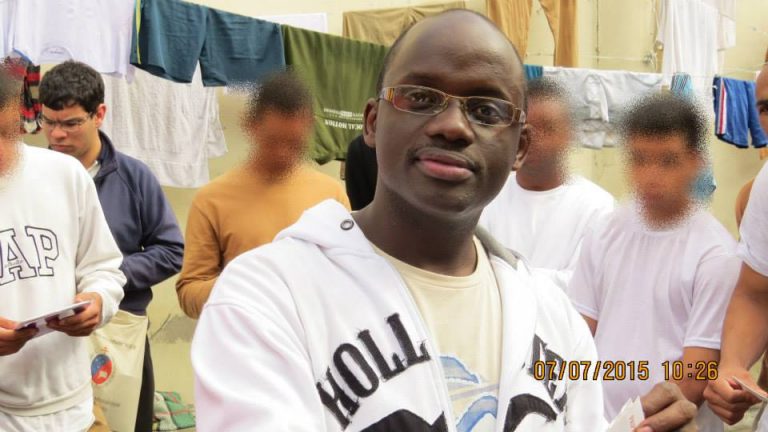 Before I begin writing about my missionary experience, allow me to share with you the scene that changed my life. On 13th March 2013, while I was in the prisons of Vila Independencia São Paulo, Brazil, doing my usual prison apostolate, the world was anxiously waiting for the new shepherd of the people of God. Surprisingly with many expectations, the prisoners who were watching the TV came to me saying: we have a new Pope, and my heart trembled and I immediately stopped the sharing I was giving. This was Francis the man that has continuously challenged my vocational calling and missionary approach. As he was later quoted saying to the ordained ministers, “Be shepherds with the smell of the sheep”, in other words his call for us to be near the people and to learn from them. These words of Pope Francis have questioned my motivations of why I want to become a missionary and specifically Comboni missionary who’s Charism is for the poor and the most abandoned.

I am a Comboni young missionary; I started my vocation discernment way back in my early childhood, which continued to grow with the help of my parents and other people. In 2000 I started my secondary school in St. Kizito Bugoolobi where I learnt to be a committed Christian especially in the prayer group and at Mbuya paraish with the help of Fr. Joseph Archettie and Fr. Mario Imperial. After two years of serious discernment and prayer life in the noviciate at Lusaka Zambia, I made my first religious vows in May 2011. This made me a member of the Institute of the Comboni Missionaries of which after in August the same year I was asked to go to Brazil for my theological studies for a period of four years. Of course, Brazil is one of the biggest countries of the world with the population of approximately 200 millions of people of whom a good number profess the Catholic faith.

While in Brazil, I liked singing and one of the songs was: “e o pelo mundo eu vou. Cantando o teu amor. Pois disponível estou para servir-te senhor”. Literally translated as: “and by the world I go singing your love and I am available to serve you Lord”. This song always reminded me how far I had come and the joy of being a young missionary who begins to venture in other cultures, which are totally different.

I spent four years and four months in Brazil studying theology. Of course the first challenge I faced was to learn a new language and a new culture. But later I went through the language and began to understand slowly by slowly the Brazilian culture. Although the culture is mixed up with many African traditions that were taken at the time of slave trade, there were a number of elements to assimilate and learn. But as missionary I am called to be open to other cultures in order to be able to bring to heart the word of God to a given group of people.

Let me to share with you my turning point at this formation stage, which I refer to as: “the contrast between the studies I was getting at the university and the reality of people I used to meet during my pastoral commitments.” By the time I started assimilating the theoretical theological aspects, I was already much involved in the pastoral responsibilities in our parish (São Sebastião), in small Christian communities or what they call CEBs (comunidades eclesiais de base), prison apostolate and movements of people without land or what they call “Sem Terra”. Most of the times I found myself not only celebrating the word of God with the people, but also involved in other activities that are deeply and part of the Brazilian people. Such activities included several pilgrimages to the biggest shrine of our lady of Apparition (Santuario Nacional de Nossa Senhora da Aparecida) seeking her intervention in wrong political situations, protests against violence and killing committed to the poor youths who are African descendants, conferences on human rights and justice to all the people of God etc.

Such involvements were always challenging the theology I was having in class. There was a practical theology in the concrete realities of life and the theoretical theology of the books. I was being forced to contemplate more on the study of God (‘Theo’- study of God) with the concrete people who were suffering all kinds of injustices than on theoretical theology. Beautiful as it is, I couldn’t understand theology because it posed me many questions on how the beautiful teachings about God who is all loving and all powerful couldn’t be explained in the greater miseries of many of his children. This caused me a lot of thoughts and I almost left in the second year of theology. I remember talking about it several times with my Formator and Spiritual Director of such difficulties and how I thought it well for me to leave and have other things to do in life. From that moment I begun a journey of serious discernment and decided to give in time and prayer as I meditated on the words of St. D. Comboni, which says: “the works of God are born at the feet of the cross.”

The truth of everything is based on life experiences about concrete contact with the people of God. Some concrete examples that I encountered during my prison apostolate especially the majority of the prisoners being black Brazilians, was a young boy called Kim, 18 years old who was serving a sentence of 5 years for drug trafficking. He shared with me that his mother used strong drugs that she couldn’t stay at home any more. Since Kim and his brother were teenagers, they couldn’t survive and so they moved to their maternal grand mother’s house who was also old without any earning. Kim being the eldest looked for a job and could work the whole day ending up with little money to make them survive for a day. The situation was so hard and some one called him for a well-paid job, but which was to sell drugs. And as tears rolled down, he told me that’s how he ended up being in prison because of looking for how to survive with my brother and grandmother. As he cried extending his hand to me, he also told me about his grand mother being very sick and dying and she could die without any chance of seeing her again. Down hearted he said: I know that she will never forgive me because I went to sell drugs in order to look for her and my brother some food.

I used to believe that God was a policeman or one who always punishes when we sin against him.

Another was a mother of a prisoner whom I called trying to give the news of whereabouts of her daughter. Susan, a South African girl was caught at the airport with drugs and she was taken to prison not knowing the time she will be out. When she saw me, she came to talk to me crying asking me for a favour to call her mother and inform her on the situation of her life. Susan had been in prison for almost eight months and her family was not aware where she was. On calling, it was an old woman and I introduced myself; and the work I was doing in the prisons. I requested her to listen to me and carefully informed her that her daughter was in prison and had asked me to call her. The old woman in rejection said that her daughter had died and the family didn’t know where even the body was buried. Insisting a bit I told the old lady that her daughter was alive and she was in prison with good health.

As I ended the call, she was in deep tears and thanking me for the good news. Then I later received her message saying like this: “brother Vincent you are an Angel sent by God, I thought that my daughter was dead for many months, but now she is still alive. I thought I will never meet her again, but now I have the hope to see her even if its ten years in time. Thank you for brining light back in my life and family. May God bless you in this work you are doing”. I am glad that during my prison apostolate I was able to give a message of hope to many families that didn’t know where their members were. There are many other similar experiences of life, which I can share with you about my apostolate commitments, but allow me to cut them short. Thanks to such experiences that continuously nurtured my image of God and the holistic mission.

I used to believe that God was a policeman or one who always punishes when we sin against him. But when I begun to deepen my prayer life in his word, my experiences with the suffering innocent I changed the way of talking and of seeing things. I now know that God’s name is mercy, love, forgiving and slow to anger. I understood that the God I was studying and reading in the bible had became Man. This very God had assumed a human flesh in Jesus of Nazareth. Therefore, the sufferings of all humanity are in Jesus Christ and as long as mankind continues to suffer, Christ will continue to suffer with it. For this reason I conclude by saying: “a good a missionary is one who doesn’t run away when there are sufferings, but instead stands strong because Jesus Christ is fully present in the sufferings of the people.” Such is the missionary that Pope Francis talks about “a missionary with the smell of the sheep.”

After four years and half of all these missionary experiences in Brazil I am happily looking forward for the new mission that awaits me in Alenga community in Lira Diocese. I hope that this missionary service may be fruitful to my missionary life and the church that I am called to serve as Comboni Missionary. So I encourage you young men and women who have this call to respond happily trusting in God and seeking the help of Mother Mary. “Young people don’t fear, go and preach the word of God” these were the words that Pope Francis said to us on the Sunday 28/07/2013 as he concluded the world youth day at the beach of Copa Cabana in the city of Rio de Janeiro- Brazil.